Sunday marked the biggest night of the year in Hollywood, as the best of the best in the film industry flocked to the Dolby Theatre for the 88th annual Academy Awards, a.k.a. the Oscars! Honoring the top movies, casts and crews, the show was chock-full of memorable moments from big wins, to jaw-dropping performances, to meaningful acceptances. Leonardo DiCaprio (finally!) snagged himself a gold trophy for Actor in a Leading Role in “The Revenant.” We’re also beyond thrilled for Brie Larson, who took home accolades for Best Actress in a Leading Role in “Room,” and the entire team behind “Spotlight,” which won Best Picture. Besides the lucky winners, Chris Rock’s bold opening monologue, Lady Gaga’s tear-jerking rendition of “Til It Happens to You” and Leo’s speech shedding light on climate change made the evening one for the record books.

We were also left star-struck by the stunning fashions that graced the red carpet. Most notably, glasses and shades proved to be coveted accessories among celebs, especially the gents. Flaunting a primarily black, gray and silver palette, their eyewear was beyond chic. Classic silhouettes like studious rounds, wayfarers, aviators and rectangles commanded attention, and were further accentuated with matte and metallic finishes, ombré colorations and tinted lenses. Take a peek at what styles our fave A-listers were rocking below. 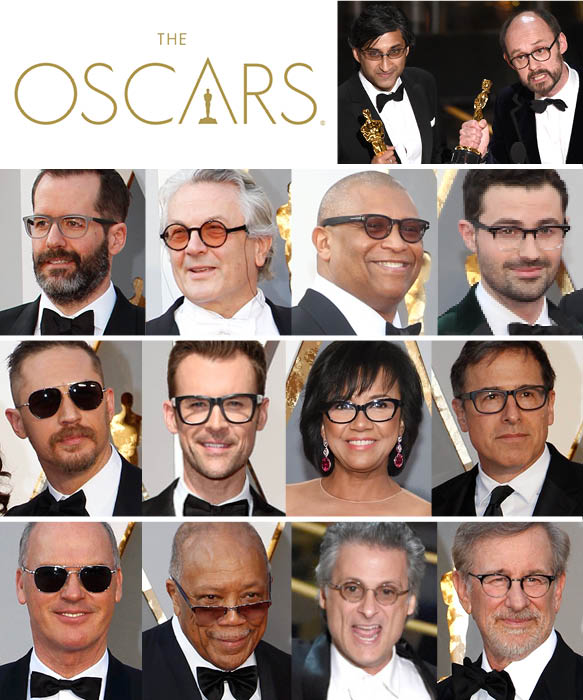