‘Twas an exciting night for celebs who make their mark in television, as Sunday marked the 67th Annual Emmy Awards! The best of the best in the industry swarmed the stunning Microsoft Theater in downtown Los Angeles yesterday evening in the hopes of earning a golden trophy for their hard work and talent. A huge congrats goes to all the lucky winners—we’re especially thrilled for Jon Hamm who finally snagged accolades for Outstanding Lead Actor in a Drama Series for his role as Don Draper in “Mad Men,” as well as the cast and crew of “Game of Thrones,” which won one of the biggest awards for “Outstanding Drama Series.” All in all, it was an event to remember—besides the big wins, we loved the inspiring speeches, exciting comebacks and sad farewells, not to mention host and funny guy Andy Samberg who kept the audience in constant laughter. But most of all, we had our eyes glued to the fabulous specs and sunnies that accessorized the glamorous outfits (and cool party garb!) of our favorite A-listers.

When it came to their eyewear, stars went for a neutral palette to complement their stand-out gowns and dapper suits—think chic nude, jet black, classic tortoise, soft beige, crystal clear and sleek silver. Meanwhile, all kinds of on-trend silhouettes ran the gamut, ranging from traditional aviators and rectangular profiles, to studious and old-school rounds, to geek chic-inspired squares and wayfarers. Minimal detailing—besides glossy and metallic finishes, gradient and mirrored lenses, subtle temple accents and ombré effects—allowed these chic glasses and shades to shine through. Take a peek at what the famous folks wore below. 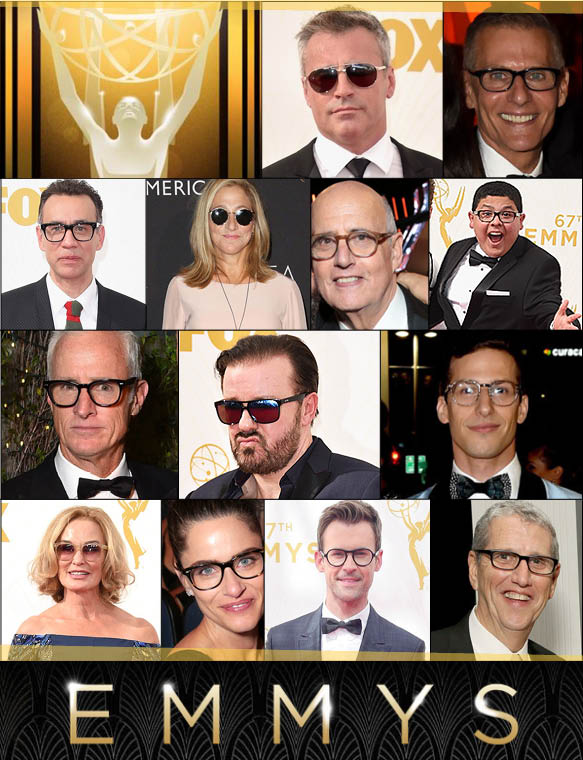